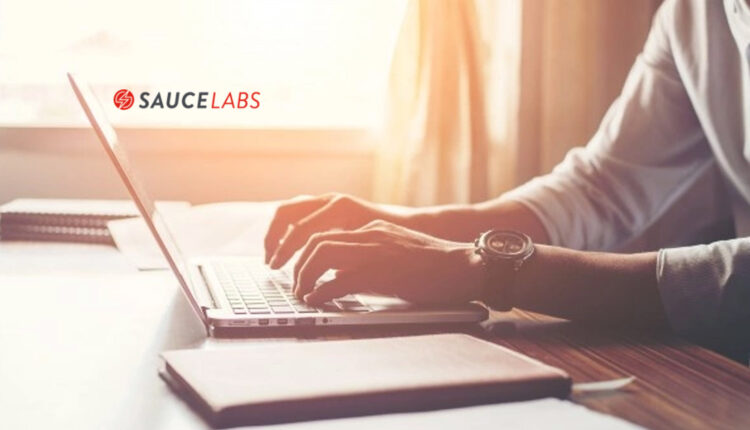 Sauce Labs Inc., the leading provider of continuous testing solutions that deliver digital confidence, today unveiled a series of new developer-centric capabilities designed to help organizations shift left and embrace continuous quality, including support for new JavaScript test automation frameworks and the addition of end-to-end visual testing. The launch of the Sauce Testrunner Toolkit boosts efforts to shift testing left by supporting a host of developer-preferred test frameworks directly on the Sauce Labs cloud, including Cypress, Playwright, and TestCafe. Additionally, the launch of end-to-end testing as part of the Sauce Visual solution gives developers a more complete view of application quality, allowing them to test for both functional and visual regressions in the same suite.

Coupled with the company’s recent acquisition of API Fortress and planned acquisition of AutonomIQ, these new capabilities further establish the Sauce Labs Continuous Testing Cloud as the most comprehensive, cloud-based continuous testing platform in the industry, with capabilities tailored to meet the specific needs of developers and QA/SDETs alike.

“As developers increasingly take ownership of quality, it’s clear that the days of one-size-fits-all testing strategies and platforms are well behind us,” said Matt Wyman, chief product officer, Sauce Labs. “Successful testing in the DevOps era is about giving developers the optionality and flexibility to work within the frameworks with which they’re most comfortable, and about giving them the ability to harness and understand the different test signals proliferating throughout the dev cycle. With support for Cypress, Playwright, and TestCafe, as well as the launch of end-to-end visual testing, Sauce Labs makes it significantly easier for organizations to do both.”

As organizations continue to shift toward DevOps-driven, agile development processes, the need to begin testing web and mobile applications earlier in the software development cycle is more acute than ever. Today’s enterprise organization has a broader spectrum of testing needs that includes a wider range of personas expected to test, including and especially developers. As testing continues to shift left and developers bear greater responsibility for quality, the ability to support a broader range of frameworks is critical.

With the Sauce Testrunner Toolkit, developers can now run their Cypress, Playwright, and TestCafe tests directly on the Sauce Labs cloud. This allows them to test earlier in the delivery pipeline using their preferred frameworks and access the full range of browser, OS, and device combinations, as well as advanced debugging, analytics, and collaboration features afforded by the Sauce Labs cloud.

The Sauce Testrunner Toolkit provides a single solution for organizations that prefer newer JavaScript test automation frameworks, augmenting the company’s already best-in-class support for Selenium and Appium. It allows developers to run JavaScript tests at scale leveraging the massive parallelization enabled by the Sauce Labs Continuous Testing Cloud, or to orchestrate tests on their own infrastructure through pre-configured Docker images. Whether testing on-prem or in the Sauce cloud, insights are integrated directly into developer workflows, enabling users to view all test results, artifacts, and metadata in a single place.

Similarly, as developers seek to build customer confidence in the quality of their digital experiences, ensuring that applications look, function, and perform as expected on every browser, OS, and device is more critical than ever. Even when functional and front-end performance tests pass, bugs in the form of visual discrepancies often still make it into production. With end-to-end testing as part of the Sauce Visual solution, developers can integrate fully automated visual testing into their development process to gain a more complete and holistic view of application quality.

With the launch of end-to-end testing as part of the Sauce Visual solution, users can maximize their investment in test automation, reduce the time spent writing tests, and increase overall test coverage by performing both visual and functional testing in the same test run. Key features include:

HR Technology News:  How To Manage A Remote Workforce