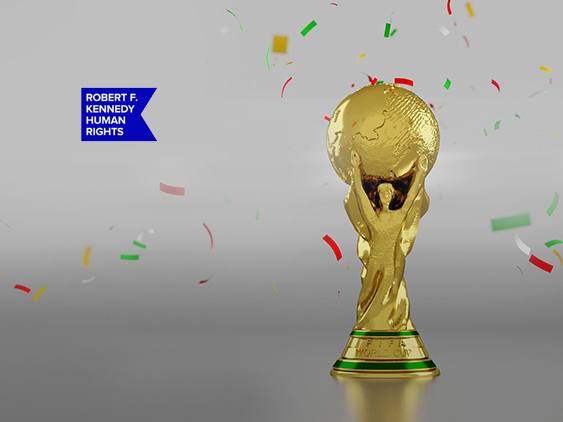 Robert F. Kennedy Human Rights announced Cameroonian human rights defenders Maximilienne C. Ngo Mbe and Felix Agbor Nkongho (Balla)as the 2022 recipients of its annual Human Rights Award. A ceremony honoring the two laureates will take place Tuesday, June 7 at 2pm in the Kennedy Caucus Room, U.S. Senate in Washington, D.C.Recognized for their ongoing efforts to combat human rights abuses and defend civic space and democracy across Cameroon and Central Africa, Ngo Mbe and Nkongho join a distinguished group of more than 55 activists and organizations honored throughout the award’s 38-year history.The RFK Human Rights Award was created to honor and support those who live out my father’s core belief – that the power of individual and collective moral courage can overcome injustice,” said Kerry Kennedy, president of Robert F. Kennedy Human Rights. “Maximilienne and Felix are the embodiment of that mindset. Their dedication to the advancement of human rights and persistence in the face of great personal risk are truly inspiring, and we look forward to working alongside them.”A Cameroonian human rights defender with over 30 years of experience, Ngo Mbe is Executive Director of the Central African Human Rights Defenders Network (REDHAC). Since 2010, she has led REDHAC in its efforts to promote civic space and protect fundamental freedoms throughout Central Africa through investigations of human rights abuses, advocacy before regional human rights bodies, monitoring of democratic processes, and demanding state accountability. She was previously named an International Woman of Courage in 2021 by the U.S. Department of State.

“Receiving the RFK Human Rights Award 2022 still feels like a dream,” said Ngo Mbe. “I am humbled by this recognition and dedicate it to my family, my colleagues at REDHAC, the members of the REDHAC Board of Directors, in particular Me Alice Nkom, and the Human Rights Defenders who have been my source of strength over the years. I look forward to working alongside Robert F. Kennedy Human Rights as we continue our struggle for justice, human rights, and peace in Cameroon and Central Africa.”Nkongho is a Cameroonian lawyer and human rights defender. He is the director of the Centre for Human Rights and Democracy in Africa (CHRDA) and a leading advocate for human rights of Cameroonians in the conflict-stricken Anglophone region. Nkongho’s work focuses on the promotion of democracy, good governance, access to justice, and rule of law. His reputation as a devoted human rights defender is evidenced by his tireless work for human rights in Cameroon and throughout Africa, despite state sanctioned pushback, including his arbitrary detention in 2017.”When I got news of the award, I was staring at portraits of my late parents and crying tears of joy. This is the best gift I could ever offer them, and I am sure they will be celebrating in heaven,” said Nkongho. “I am truly honored, and I sincerely thank Robert F. Kennedy Human Rights for considering me worthy of this award. It is dedicated to all those who advocate for the promotion and protection of human rights, to all the human rights defenders who continue to put their lives and liberty on the line to fight against injustice.”The Robert F. Kennedy Human Rights Award honors champions of social justice who stand up to oppression in the nonviolent pursuit of human rights. Honorees receive a cash prize and ongoing support for their work through RFK Human Rights campaigns and mobilization, strategic litigation, training and capacity-building, and more.