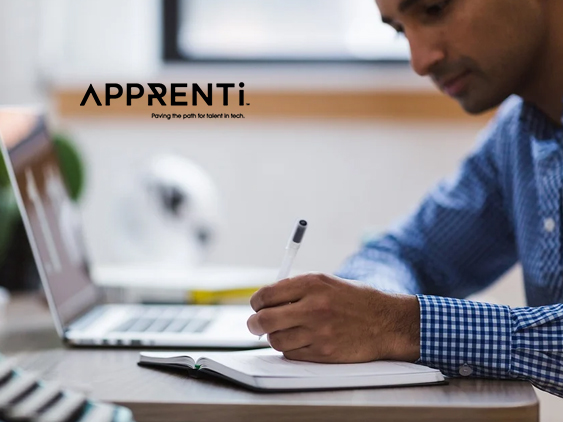 Apprenti, a national leader in registered tech apprenticeships, celebrates its five-year anniversary, a major milestone since its initial launch in 2016. With over 1,500 apprentices placed, Apprenti is now seeking significant growth and adoption by the sector as a strong secondary talent pipeline.

Apprenticeship programs offer a unique solution to the growing talent gap nationwide. In fact, according to the US Department of Labor, 3,143 new apprenticeship programs were established nationwide in 2020 – a 73 percent increase from 2009. Employers have a continued demand for skilled, well-paid workers, but this is largely unmet due to a broken pipeline and a lack of options for those without a four-year college degree. Apprenticeships offer paid, on-the-job training that directly satisfies employer demand and builds a well-trained and reliable workforce.

“Since launching our first registered apprenticeship in Washington, Apprenti has expanded across the country, and now continues to pave the way for what impactful, change-making programs should look like nationwide,” said Jennifer Carlson, Co-Founder and Executive Director, Apprenti. “I’m incredibly proud of everything our team has accomplished over the last five years, and know these successes are just the tip of the iceberg.”

Apprenti is the nation’s first registered tech apprenticeship program that places diverse talent into top tech roles across the U.S. Apprenti delivers a proven, reliable pipeline for underrepresented groups, bridging the talent gap and giving diverse talent with non-traditional backgrounds the opportunity to apprentice at some of the top companies in the world.

“Over the last five years, Apprenti has made lasting changes to the composition of our workforce, diversifying a talent pipeline that traditionally favored white men,” said Michael Schutzler, CEO, WTIA. “It’s been an honor to help Apprenti grow from Washington State to a nationwide program in such a short amount of time. The power of apprenticeships is proven and will continue to evolve our workforce for the better.”

Apprenti operates nationally, and has placed diverse apprentices across the country at top companies including Amazon, PayPal, Wayfair, Liberty Mutual and JPMorgan Chase, among 70 others. More than 25 percent of apprentices are Black/African American, 13 percent are Hispanic/LatinX, 51 percent are veterans, 29 percent are women and 14 percent overall self-identified as having a disability. These figures point to Apprenti’s impressive success in providing a pathway to tech careers for diverse apprentices from non-traditional backgrounds, and this is further cemented when comparing against the national average, where just nine percent of total apprentices are women, and only 10 percent are Black/African American.

Apprenti is not only successfully partnering with companies to close the talent gap with diverse talent reskilling, but the net impact on lifetime earnings is over $1.1M. Apprentices earned a median income of $42,000 prior to joining the program, with 28 percent unemployed prior to Apprenti. Once in the program, their apprenticeship wages went up to a median of $67,300 plus benefits, with retained wages over $85,000 plus benefits. More than 80 percent of apprentices are retained or hired post-apprenticeship. This is not only life changing for apprentices, it is changing socio-economic outcomes for families.

‘The Great Resignation’ Is ‘The Great Upgrade’ in Disguise

CrowdComfort Experiences Significant Growth With Customers and Partners in 2021