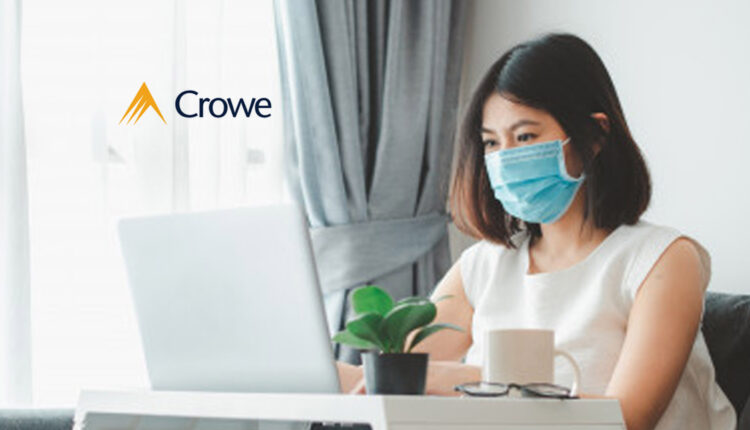 The Crowe business challenges survey tracks executive sentiment on the pandemic, the economy, racial injustice and other issues

As COVID-19 cases across the United States spiked in mid-July, executives expressed significantly more concern than just a few weeks prior, according to data from the new report, “Crowe Business Challenges Survey: Part II.” Sixty-eight percent of respondents in the last weeks of July noted high concern about the pandemic, up from just 51% a few weeks earlier, a 17-point jump.

Crowe, a public accounting, consulting and technology firm in the U.S. with offices around the world, conducted a pulse survey of 349 C-suite executives in three phases between late June and mid-August 2020 for the second report in the firm’s ongoing research series. The first report examined sentiment between late April and early June. The research series compiles responses from leadership spanning industries such as the public sector, financial services, construction, healthcare and manufacturing and distribution. The second report analyzes respondents’ evolving uncertainty and pessimism, the remote-work transition, and organizations’ top concerns and actions taken – including assessments on how their businesses and the government are navigating important social issues.

This survey’s second phase occurred from July 15 to Aug. 1, which coincided with a nationwide resurgence of the coronavirus. In addition to increased concern about the pandemic during this phase, respondents also grew more pessimistic about the overall economy – 49% were somewhat or very pessimistic in the survey’s first phase, while 54% said as much in the second. Respondents also reported more high uncertainty within their organizations in the second phase – 28% compared with 22% in the previous phase. Worries about a second wave of COVID-19 have remained largely static, but high, with 85% of respondents at least moderately concerned about a potential second wave.

“In July, as some restrictions were loosened and the virus spiked, it became clear how closely the economic recovery is tied to public health,” said Ann Lathrop, chief marketing officer at Crowe. “Organizational decision-makers were navigating whether or not to open their offices, facilities, schools or universities. They faced very tough and complex decisions balancing the health of their people with financial resiliency. Our data shows that worry, concern and uncertainty remained the norm for executives this summer.” When asked how much uncertainty their organization is dealing with, 24% responded with high uncertainty, 60% with moderate uncertainly and only 16% reported minimal uncertainly.

In the first report of this research series, 43% of respondents expected COVID-19’s effects on their organization to meaningfully decline by the end of 2020. However, by the second report reality appeared to sink in, and that optimism withered with only 12% of respondents now predicting 2020 for organizational recovery.

The survey also asked how respondents would rate their organization’s response to several social issues. More than half of respondents rated their organization’s responses to both racial injustice and social inequality as excellent or good. “Following the events that magnified nationwide racial inequity this spring and summer, many companies, including Crowe, were compelled to speak out, take a stance or address how they can fight against racial injustice within their own organizations. Even if those actions are in early stages, the fact that companies are addressing systemic problems appears to be making an impression,” added Lathrop.

Other key report findings include:

The report also specifically looks at the public sector services industry, including respondents from government entities, higher education institutions and not-for-profit organizations. Public sector respondents usually were about 10 percentage points more uncertain (or outright pessimistic) about the pandemic’s effect on their organizations than respondents in general.

“Public sector employees are on the front lines of the pandemic,” said Kevin Smith, managing partner of the public sector services group at Crowe. “The decisions about whether or not to open schools and universities or lift pandemic restrictions impact not only their organizations but the public as a whole. Additionally, economic struggles usually hit the sector at least a year later, after tax revenues, tuition fees and charitable donation decline, so it’s not surprising this group is notably more uncertain or pessimistic.”

Additional key findings from the public sector include: