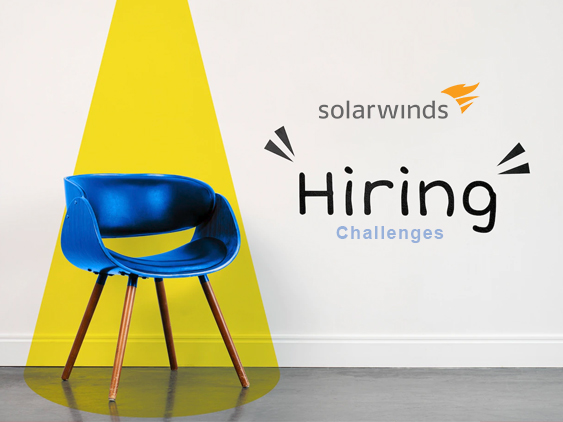 SolarWinds survey: Two-thirds of IT pros say they’re confident in their tech career despite a potential economic slowdown, but only half say their company has been adequately staffed amid the “great resignation”

SolarWinds  a leading provider of simple, powerful, and secure IT management software, unveils the results of its new survey examining the state of the technology job market amid industry-wide labor shortages and hiring challenges. Released to coincide with the eighth-annual IT Pro Day holiday, the survey found despite a potential economic downturn, more than two-thirds of tech and IT professionals surveyed said they’re completely confident in their career choices. But with the “great resignation” resulting in tens of millions of employees leaving the workforce or changing jobs, only half of survey respondents felt their companies have been adequately staffed in recent years.

To combat these staffing issues and recruit during a historically tight labor market, 59% of respondents said their company has added more flexibility in hours and work location, while a third (33%) said their employer has increased pay. Meanwhile, when asked what’s most important to them in their careers, IT pros ranked salary and work-life balance highest.

“The new SolarWinds survey makes clear IT and technology sectors haven’t been immune to the staffing challenges posed by the ‘great resignation’ and pandemic,” said SolarWinds Head Geek Thomas LaRock. “This is particularly challenging for IT teams because they’re not only feeling understaffed but also are expected to do more with less as network environments become increasingly complicated. Remote work and hybrid and multi-cloud environments have made it extremely difficult to keep networks—and businesses—running smoothly but these IT pros show up every day to get the job done.”

In addition to the new survey results, SolarWinds is also announcing the winners of this year’s IT Pro Day Awards, now in its third year of recognizing IT pros. Though the work of IT professionals is vital to the success and continued operation of each and every organization, their efforts can often be taken for granted. Each of the honorees has demonstrated commitment to their role and excellence in their profession despite increased workloads, the challenges posed by remote work, and the rapid implementation of new tools and technologies like AI.

Rookie of the Year: Sebastian Gonzalez (United States) — Sebastian works at Rock Energy Systems in Wisconsin. He’s graduating this year with a Bachelor’s Degree in Data Analytics and Data Management from Western Governors University. Though he has only been with Rock Energy for nine months, Sebastian has had the opportunity to make an immediate impact on the team. He’s managed to quickly develop his technical and professional skills while gaining extensive hands-on experience in the field. Sebastian is excited to apply his growing knowledge to new scenarios and use cases as he continues to further his career in IT.

Rockstar of the Year: Tim Techathuvanan (United States) — Tim has been programming professionally since he was a teenager. He took a few years off to earn a Ph.D. in mathematics from the University of Wisconsin before returning to programming as a quantitative analyst for a hedge fund. After a few years at the SEC and another stint in finance, he decided to retire from that career and start a new one automating IT administration. He is currently enjoying his work automating virtual server management for the National Institutes of Health and learning new things every day.

IT Mentor of the Year: Zia Ur Rehman (Pakistan) — Zia Ur Rehman, a tech enthusiast and an entrepreneur with multiple startups, is on the road to becoming a tech industry veteran. He started this journey with Cleodora – a tech startup. Having mentored multiple ventures on the way, he made his mark as the CEO of ‘CodesOrbit’ and is currently vested in transforming the world with Artificial Intelligence and Machine Learning as the Co-Founder of “RevolveAI” – a trailblazing firm specializing in core AI and machine learning technologies. Having pooled a decade of experience in “ideapreneurship” with an unquenchable desire to bring innovation, Zia passionately engages with young minds and mentors them toward leadership.

10 Years On, Adrenalin eSystems Continues Its Singular Focus On HR Tech in Philippines