How the Covid19 Pandemic Affected The US Job Market

The year 2020 has been monumental in regards to historic events. Just a few months into the new year, unemployment had reached its highest rate since the Great Depression, statewide lockdown orders were put into places, and many places of businesses were temporarily closed or moved online due to COVID-19, a new, unknown strain of coronavirus. By August 19, 5,674,325, cases of Covid19 have been reported in the United States leading to the deaths of  175,694 people nationwide. With the top ten states with the highest infections being California, Florida, Texas, New York, Georgia, Illinois, Arizona, New Jersey, North Carolina and Louisiana.

Social distancing measures and government-mandated regulations and shutdowns were put into place to flatten the curve or slow the spread of the virus. These measures such as businesses being temporarily closed or others having a limited capacity impacted the economy and led many people nationwide with less work and in some cases without an income.

The domino effect led to the nation’s second highest unemployment rate in the last century, reaching 14.7% in April of 2020 which is the equivalent of 20.5 million jobs lost. Along with this, the insured unemployment rate, which is typically 26 weeks of benefits provided on a state level and usually compensates for half of the wages the individuals are not receiving, saw a steady increase. 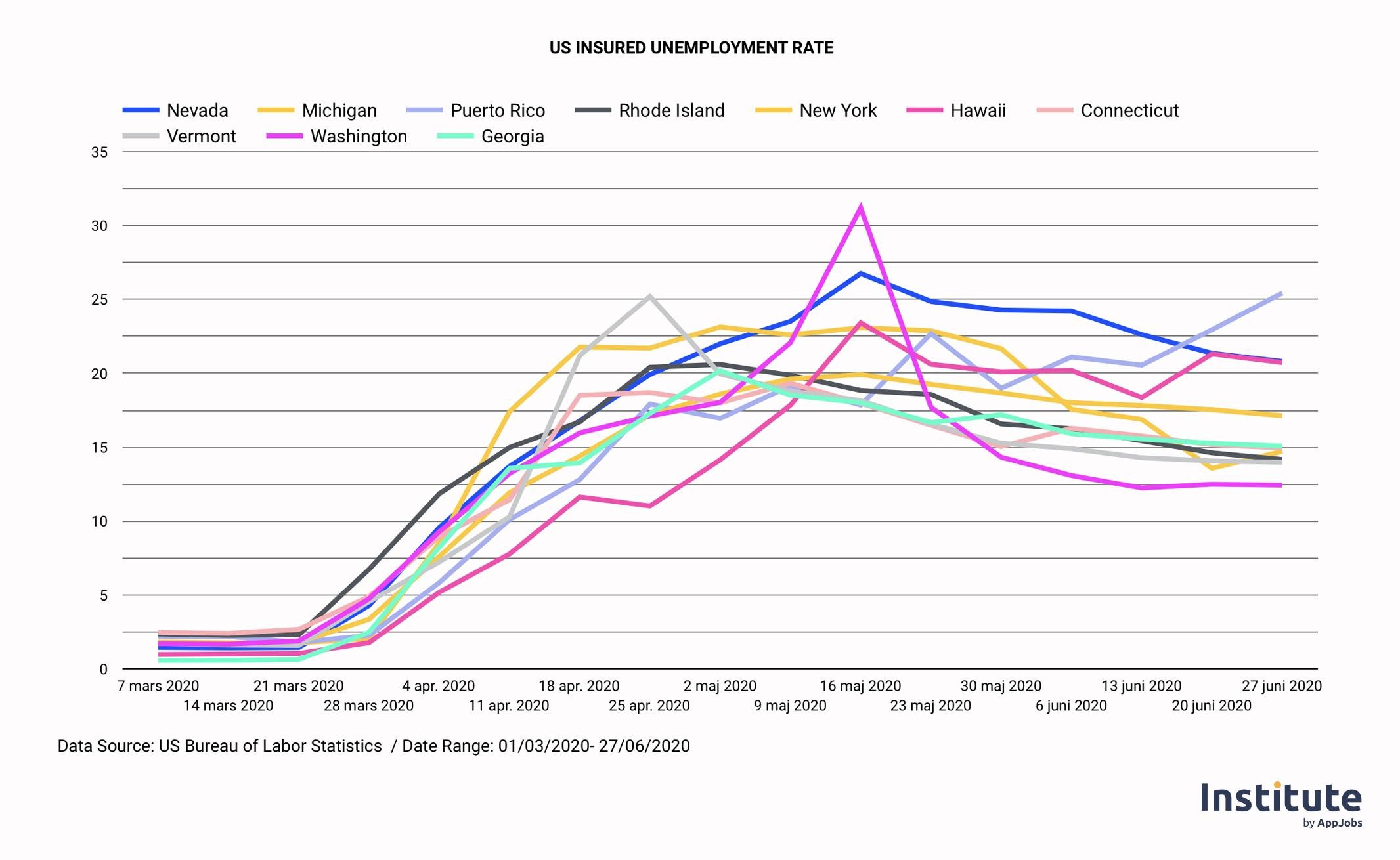 The data represented in this graph is accurate as of June 27, 2020 and is updated as the US Bureau of Labor Statistics releases new information.

Insured employment saw a steady increase as the pandemic continued due in part to many states having to prolong their preventive precautions with regards to social distancing. This data suggests that the number of people currently receiving unemployment insurance as a percentage of the labor force. Reopening of businesses impacted the amount of people applying for unemployment benefits. Although the rate peaked in May, it remains relatively high in comparison to early March rates. 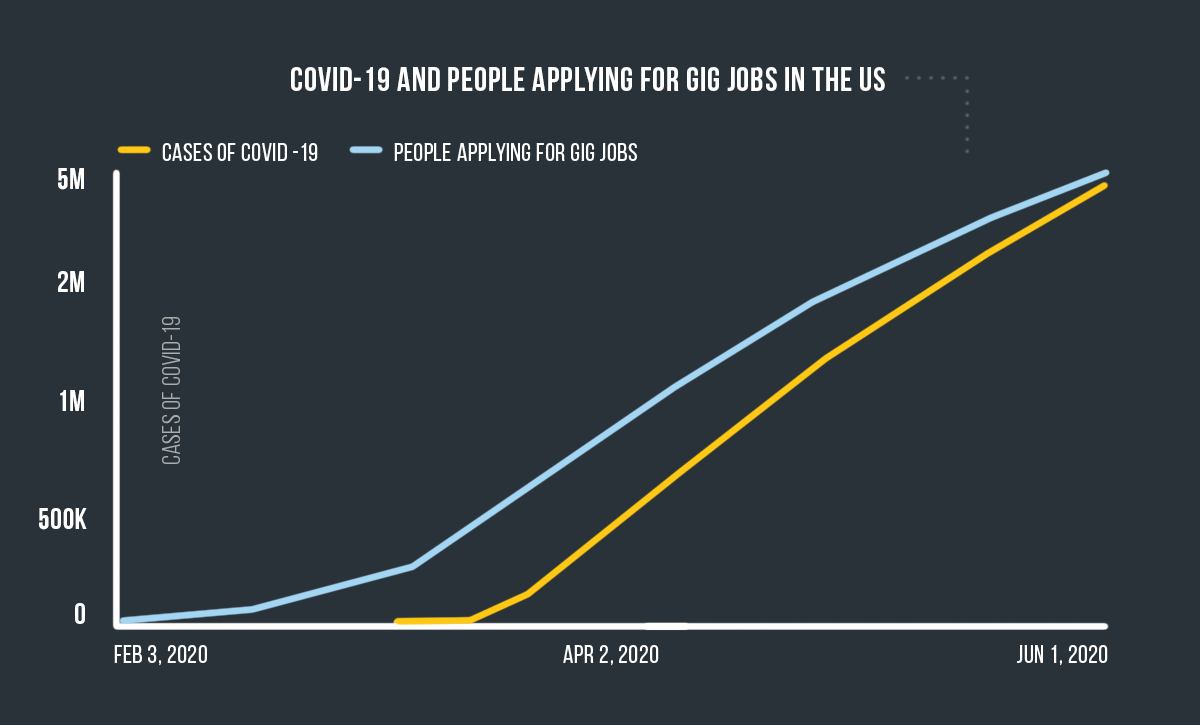 Other interesting events with regards to unemployment have emerged during the pandemic. With regards to COVID-19 and gig work, a correlation between cases of COVID-19 and the amount of people applying for gig work has been seen. This relationship may be contributed to people needing an income while businesses remain closed and benefits begin to taper off.

The data derived and analyzed by Appjobs Institute from the increase in people looking for employment through Appjobs also showed the change in the labor market concerning industry. Although businesses are reopening, many, such as restaurants, cannot operate at full capacity. This moved the interest in industry towards remote work such as freelancing. Other jobs that gained attention with those seeking employment were opportunities that align with social distancing measures such as restaurant delivery. While the interest in other work, i.e. household work, continues to remain relatively low as the demand for housekeepers or babysitters has remained low due to social distancing practices. 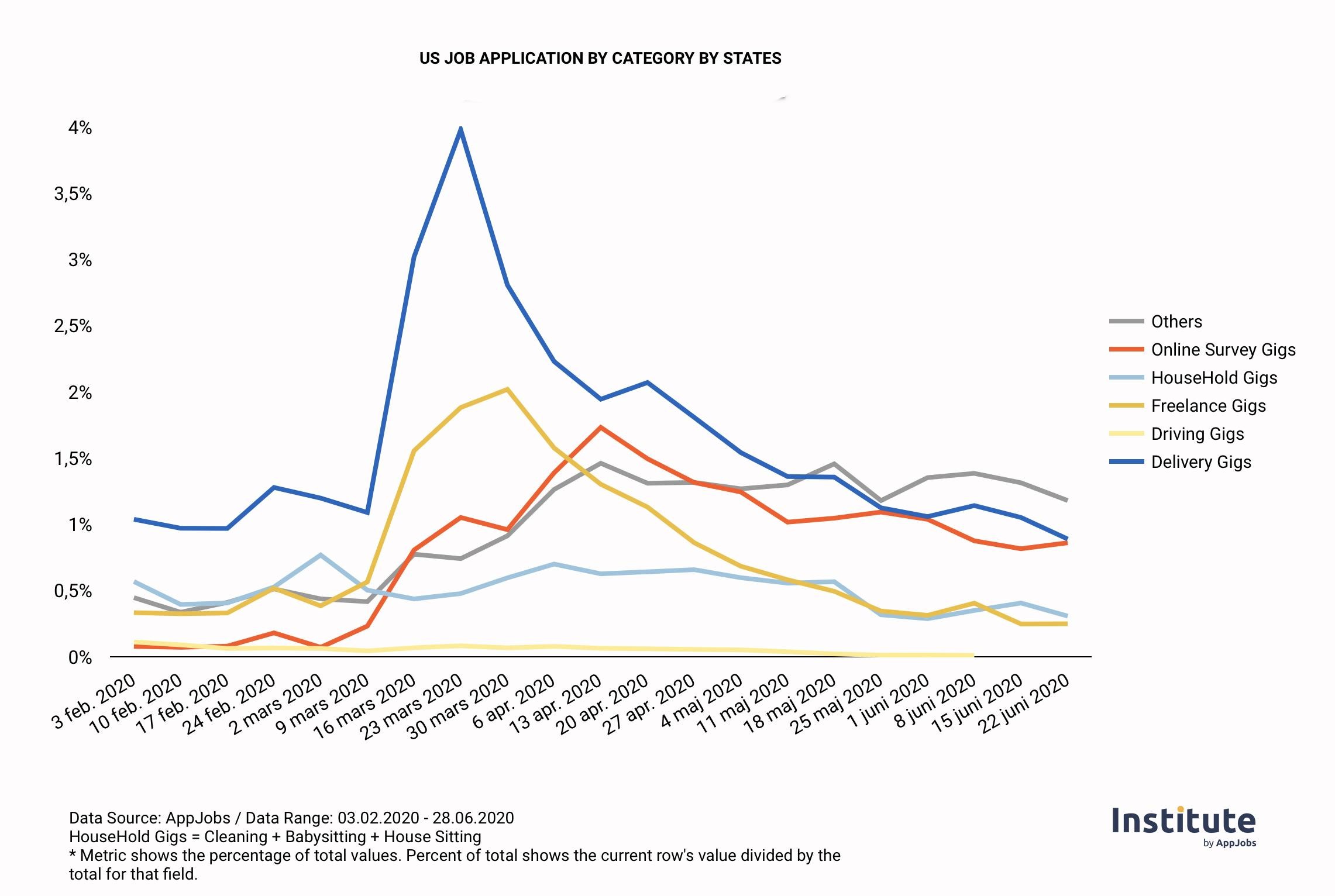 With cases rising again and uncertainty on the longevity of the pandemic, a few predictions can be made. It can be anticipated that unemployment rates will remain higher for states where the virus continues to loom, prolonging reopenings of businesses. An example of this can be seen in Texas and Arizona, where reopenings had to be reversed. Bars and restaurants were reopened but after cases began to surge again, on June 29, 2020 bars were ordered to be closed again and Texas mandated restaurants had to revert back to only have 50% occupancy.

It can also be anticipated that applications for unemployment benefits as well as people seeking other job opportunities through online, remote opportunities in states with prolonged social distancing measures will continue to be high. Although the number of job applicants reached an all time high around when unemployment peaked, many are still seeking employment with an emphasis on jobs that can be done at home or online to ensure job security. 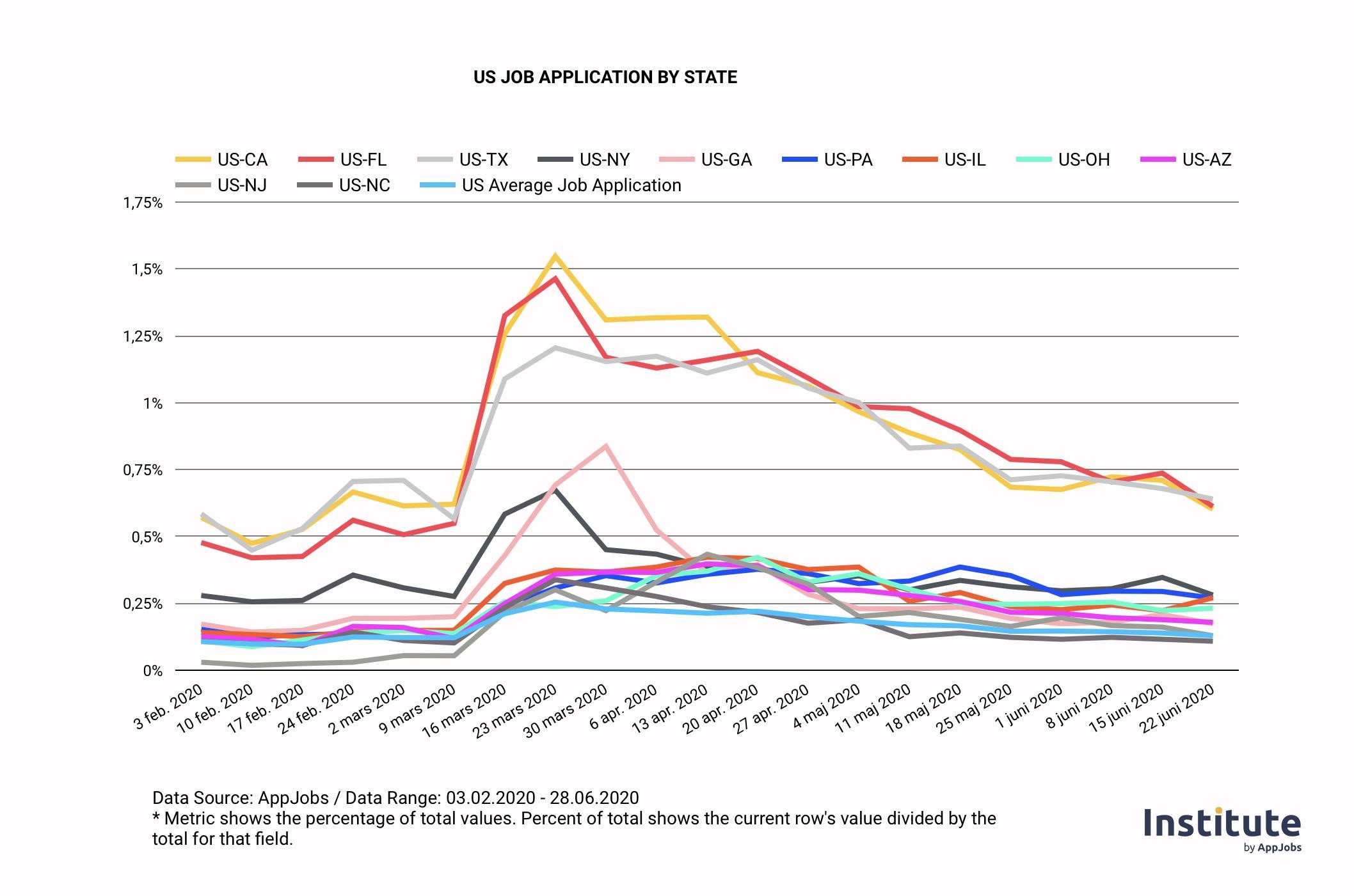 A brief overview of the last century gives insight to how the economy and unemployment is swayed by pandemics, wars, oil and energy crises, housing and stock market crashes as well as new technology. Unemployment is naturally or sustainable in the range of 3.5% and 4.5% with governmental interference happening above 6%.

In 1921, the United States experienced a “Depression” or economic recession post World War I which can be linked to the Spanish Flu which killed 675,000 people (or 0.8% of the population) in the United States and 40 million people worldwide. This pandemic was believed to cause economic declines for GDP and consumption of 6 and 8 percent respectively.

Then on the heels of the roaring 20s where the nation’s wealth nearly doubled ensued the Great Depression and the Wall Street Crash of 1929. This economic fallout had many contributing factors from a drought, to banks having large loans that could not be liquidated, to stock prices that surpassed their actual value, rising unemployment, declining production, low wages and large consumer debts. Unemployment hit its all time highest rate of 24.9% in 1933.

Unemployment would remain above 14% from 1931 to 1940. It wasn’t until after 1940 that unemployment stayed in the single digits, in fact, in 1944, unemployment reached its all time lowest point of 1.4%. The unemployment rate remained low after WWII and throughout the Korean War (1950-1953).

Over the next 50 years unemployment crept up 10.1% yet fell back to below 6%, there was another stock market crash or “Black Monday” yet the economy recovered in two years, and there were oil and energy crises. It wasn’t until 2008 that another recession shook the US due to the Internet bubble in the stock market as well as the housing market crash. Unemployment peaked at 10.1% in October 2009.

Which brings us to early 2020, where a new strain of coronavirus broke out worldwide, and the global economy suffered yet another blow. The implications of the pandemic were originally feared to reach Great Depression levels, however unemployment in the United States tapered off at 14.7% in April of 2020. As it is said, history often repeats itself and can be a useful tool and guide in facing economic and social challenges. 2020 has shown that events such as a global pandemic not only shape the ways in which countries operate, how supply chains are continued, or how to recover from crises but it also influenced people from the way they seek job opportunities to how they order spend their time in a post pandemic world.