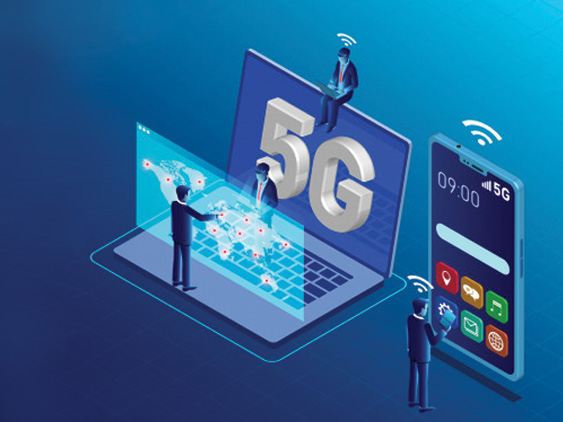 Even before broadband was introduced, people started anticipating its revolutionary effects in the field of workplace collaboration. And broadband delivered too. Live Video meetings, instant document sharing, webinars – these may not appear to be extraordinary facilities today, but they were not so common earlier.

With the dawn of 5G era in the digital age, the stakes are higher. We are talking about modernized, data-driven digital workplaces with high data-rates, low latency, and enhanced security features, much better than the current 4G/LTE standards. In the future, workplaces won’t be defined by physical locations and new applications will spring up that will catalyze collaboration in ways unheard of today. Experts and analysts predict numerous positive changes in the years to come.

To Start with, Let’s Get a Clear Picture of What 5G Is

Expected to make its way to the masses by 2020, 5G is wireless broadband based on 802.11ac standard that represents the fifth-generation of mobile cellular networks and promises speeds 10 to 20 times faster than the 4G cellular networks of today. Ericsson projected in a report that there will be 1.5 billion 5G subscriptions for enhanced mobile broadband in the period ranging from 2020-2024. Also, 55% of mobile subscriptions in North America are expected to be for 5G in 2024. 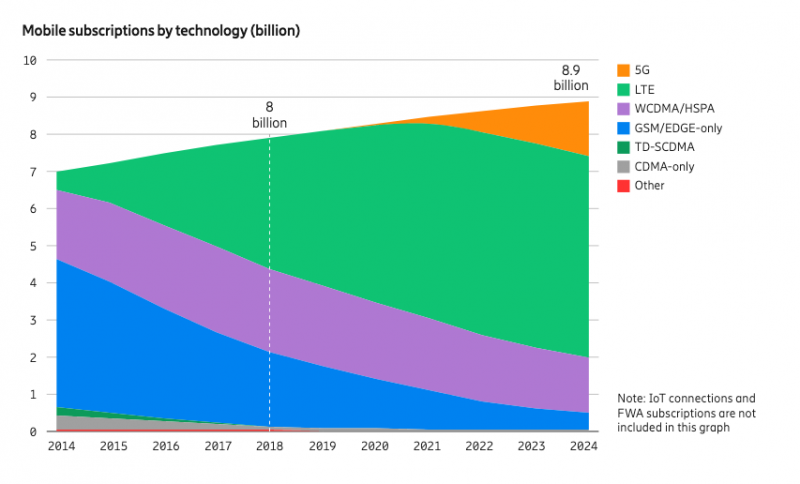 As per Gartner, 5G is “the next-generation cellular standard after 4G. It has been defined across several global standards bodies, including the International Telecommunication Union (ITU), 3GPP and ETSI. The official ITU specification, International Mobile Telecommunications-2020, targets maximum downlink and uplink throughputs of 20 Gbps and 10 Gbps, respectively; latency below 5 ms endpoint to RAN; and massive scalability, although initial deployments may be less ambitious. New system architecture includes core network slicing and edge computing.”

1G came into being in the early 1980s as the first-ever mode of mass mobile communication. It facilitated calls between mobile devices.

2G followed 1G in 1991. It used digital encryption in place of analog signals. It thus offered greater security than the first generation mobile and had the added provision for data services that allowed sending SMS messages to other mobile users. 2.5G and 2.75G succeeded 2G with slight modifications in the next few years.

3G was introduced in 2003 and brought in the ultimate mobile revolution. New prospects came into existence. Higher data speeds allowed easy access to Video content, albeit accompanied by buffering, and innovation of applications in many fields. Users could browse the internet on mobile devices and share multimedia content. GPS-location tracking was enabled in 3G.

Then came 4G in 2009 that took the ship further up a notch. Streaming speeds were faster and consumers got access to high-definition content for the first time. It continues to deliver deep web functionalities to smartphones.

5G is currently in its initial stages. It will completely transform the world of mobile connectivity. It will not just be an update, but a complete overhaul of the previous generations of network standards, Forbes says. The changes between 4G and 5G will be much more significant than that between 3G and 4G. The ITU-R has defined three main uses for 5G. They are Enhanced Mobile Broadband (eMBB), Ultra-Reliable Low Latency Communications (URLLC), and Massive Machine Type Communications (mMTC)

5G will create an integrated infrastructure that will connect buildings, transport, and utilities. It will have a huge impact on various industries that will be at an advantage owing to the raised standards of connectivity, and the overall economy will gain from it. Self-driving cars, robots performing medical surgeries remotely, unmanned space explorations – all will get a boost once 5G is in effect.

Workplace collaboration, among various other aspects, will greatly benefit from the arrival of 5G. Let’s see how.

Mobile access has been important for companies to foster a digital workplace culture. Now, mobile coverage has been on the rise in larger sections of the world, but the fact that many of the users are still relying on 3G or earlier versions is a hindrance.

In many parts of the emerging world, low bandwidth continues to hamper workplace productivity and collaboration among staff. Even 4G speeds are not always up to the mark. Quite often, workers have to rely on local Wi-Fi network connections to be able to connect and collaborate.

With 5G knocking at the doors with at least 10x the speed available today, enterprises are expecting major reforms in this field. There are going to be some huge impacts because of the role of 5G in workspace collaboration.

New applications will be developed with the latest bandwidth in mind that will allow workers to collaborate better. Automation will lend its hand in cutting out and performing repetitive tasks at much higher speeds. As a result, the talented workforce may be utilized in areas where it’s required more. Teams would be more involved in decision-making rather than committing to daily chores.

Decentralized Workforce Can Finally Be a Reality

While remote work is already in vogue since the past few years, the idea of having a completely decentralized workforce doesn’t fail to amaze business-owners and workers. A company where not all the employees are working from the same office or location, but are still connected impeccably, is yet a dream. With 5G, this could turn into a reality. Concerns related to bandwidth, latency, security, and connectivity that are currently tied with the existing cellular and Wi-Fi services would be things of the past.

In just a few years, workspace and productivity resources like smart conference rooms, office automation and the integration of AI into everyday office tasks will not just become a norm, but will be taken as granted as we take document sharing, text messaging or accessing the internet today.

4G still contains some inbuilt latency issues. These will go away once 5G comes into existence. Under optimal conditions, 5G latency will range between 1-4 milliseconds. In addition, the enhanced Mobile Broadband (eMBB) side of 5G will help workers move data at speeds much faster than the current times. The combination of lower latency and high upload/download speeds will help realize the concept of remote, connected workplaces in true sense, augmented by virtual reality.

The absence of latency from the next generation communication standard will do away with a lot of inconveniences. In the present-day world, it’s a pain for a worker to attend a meeting in real-time, remotely. 5G will bring-in an advanced IoT which could allow real-time collaboration between people and things. It will enable workers to log on to a system, and with the help of AR and VR, attend the meeting in real-time, without any lags, and feel as if he/she is physically present in the same environment as in the meeting. Real-time sync will make remote troubleshooting, remote workplace administration, doctor conferences, business meetings possible that will save loads of time and commute. Of course, developments in the field of Artificial Intelligence, IoT, and Big Data will go hand-in-hand.

5G is still in its nascent stages and the possibilities are endless. The number of 5G connections will reach 1.4 billion by 2025, accounting for 15% of the global mobile industry. The initial cost of infrastructure and hence, of 5G-enabled devices will be high, to begin with. Also, concerns regarding its security are in the minds of tech-analysts who believe newer security standards would be required to keep up the pace with 5G. But keeping a close eye on the developments would help. 5G is the next big thing and is going to revolutionize the workplace culture. The whole world is betting on its positive outcomes.

Read More: What is HR Automation?

How Do You Manage Company Inventory When Employees Are Working From Home?